What is a breach of contract? 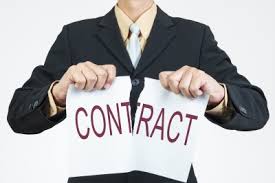 A breach of contract occurs when one party fails to perform a promise previously bargained for or interferes with another party’s performance.

A breach of contract claim must state the existence of a contract, the specifications of the parties’ performance under the contract, the defendants’ actions that breached the contract, and the harm that resulted from the breach to state a cause of action.

Amazon has acquired such a large share of many different markets, and thus enters into many

different types of contracts. Typical issues that arise in the cases of this section include shipping contract disputes1, membership contract disputes2, employment contract disputes3, and Amazon seller’s contract disputes4. In the Amazon cases, the court usually grants summary judgment when there are no facts provided to show Amazon’s conduct was unfair, deceptive, or the conduct negatively affected public interest. The only way for a claim to survive is by stating relevant facts that provide proof of breach. If there is no genuine issue of material fact, summary judgment will be granted in favor of the party that brings the motion.

In this case, plaintiff, Amazon alleged that CP Transport was hired to transport a container of Amazon Kindles from Washington to Delaware in November 2009. Amazon alleged that the driver left the shipment unattended at a truck stop, resulting in the theft of the truck, container, and goods. The court awarded damages in favor of Amazon.

This case stems from the use of Amazon Prime Services by the Plaintiffs and the alleged breach of contract claims directed at Amazon Services LLC. The Plaintiffs disputed the price changes for Amazon Prime membership and claimed that Amazon unlawfully changed the terms and agreements of their Amazon Prime membership.  Defendant’s Motion to Compel Arbitration was granted. The court found the price dispute here to be within the scope of the arbitration agreement.

In this case Amazon was involved in an action where plaintiff, Jeffrey Hammer raised a number of claims including breach of contract, defamation, violation of copyright laws. Plaintiff claimed that Amazon breached their contract because they failed to remove negative reviews of his book from the Amazon platform. The court granted Amazon’s motion for a permanent injunction preventing plaintiff from bringing any future action against Amazon.

Here, plaintiff paid a fee to sign up for the IMBD Pro service in order to connect with casting directors and obtain roles. Plaintiff claimed the service took her personal information and added it to her profile without her authorization and thus harmed her career. The court granted in part and denied in part the defendant’s motion to dismiss for failure to state a claim. Plaintiff’s breach of contract claim survived the motion to dismiss because there was a valid contract, there may have been a breach of duty and plaintiff has proven that she suffered damage. Plaintiff’s fraud claim fails because there is no specific evidence provided to support it.

Amazon.com and Zappos.com are defendant’s in a suit brought by Zappos customers following a security breach on the Zappos website. This document is a motion to dismiss by Amazon.com and Zappos. The court granted in part and denied in part the motions. The court found that the Plaintiffs had “sufficiently alleged that they have had to pay money to monitor their credit scores and secure their financial information due to the increased risk of criminal fraud against them which was caused by defendant’s negligent loss of their personal information.

Mr. Daniel Powers is a former Amazon Web Services employee. When Mr. Powers started working at Amazon, he signed a “Confidentiality, Noncompetition and Invention Assignment Agreement.”  Google, Inc., hired Mr. Powers in September 2012 to work as its Director of Global Cloud Platform Sales at its Mountain View, California headquarters. Amazon sued Mr. Powers for breach of the Agreement and violation of Washington’s version of the Uniform Trade Secrets Act. The court ultimately granted an injunction that defendant may not assist in cloud computing services to any current, former, or prospective customer of Amazon about whom he learned confidential information while working at Amazon.

Plaintiffs are former third-party Amazon.com sellers. They sued Amazon alleging breach of contract, breach of fiduciary duty, violations of Washington’s Consumer Protection Act, and unjust enrichment. The Court found a valid agreement to arbitrate. Because the parties agreed to arbitration and Plaintiffs’ claims clearly fall within the scope of that arbitration provision, the Court granted Amazon’s motion to compel arbitration. The Court stayed the case for a period of 6 months or until arbitration is complete, whichever comes first, so that Plaintiffs can pursue their claims in arbitration.

This case involved an appeal of a lower court confirming an arbitration award. The court affirmed the judgment of the lower court. Plaintiff, Stanley Singleton sued defendants, Amazon.com and Evan James, for breach of contract and fraudulent misrepresentation, over their disputes regarding the Amazon Services Business Solutions Agreement that Singleton has signed to enable him to sell merchandise on Amazon’s website. The arbitrator ruled in favor of Amazon. Here, the Court of Appeals affirmed the trial court’s decision finding that the arbitrator did not err in confirming the arbitrator’s award.

Amazon.com was a defendant in a negligent misrepresentation suit. Amazon motioned for summary judgment. Plaintiff claimed that Amazon “fraudulently induced him to accept a position of employment in the company, or in the least negligently misrepresented the nature of compensation of the employment; that Amazon inappropriately terminated him on the basis of his disability in retaliation for a worker’s compensation claim, and in transgression of public policy.” The United States District Court denied Amazon’s motion for summary judgment for the fraud claims in the inducement, negligent misrepresentation, and workers’ compensation. The court granted Amazon’s motion for summary judgment for the claims of wrongful discharge on the basis of disability and in violation of public policy. The court found that Spears had created a genuine issue of material fact as to whether or not Amazon made the offer to Spears in reckless disregard of its falsity.

The court here, on appeal was deciding whether to reverse the trial court’s order granting a preliminary injunction against defendants from using new “one to one” technology because defendants breached their contract with plaintiff. The court reversed the preliminary injunction because it found the trial court did not properly consider the contractual language or provide sufficient support for its findings.

Read more posts relating to this topic below: