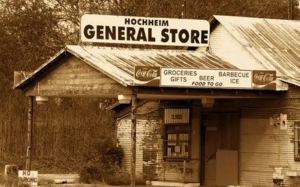 Instead of directly answering your question, let’s dig a little deeper into the history of retail goods, and the power of search engines, and use this information within a hypothetical scenario.

So, to fully understand the modern consumer market, let’s observe the path that led us to where we are today.

Definition of Retail: Sale of goods to the public in relatively small quantities for use or consumption rather than for resale.

Technically, the retail industry can be traced back thousands of years. The word “retail” has evolved into a much more complex and diverse noun. However, retail is the simple act of one person trading an item of value with another person for an item of identical value. When these two parties decide that it is in their best interest to exchange whatever it is the other wants, a retail transaction occurs.

It can be argued that these sales have occurred since the early 1400’s on The Silk Road or during the 1600’s along the British-Indian Spice Trade. Now, fast forward to the colonial era – this is when the roots of “mom and pop” shops began to surface.

A Brief Timeline of Retail:

1883: The first cash register is invented by James Ritty

1985: The birth of infomercials and home shopping networks

John Doe is an honest, hard-working American business owner. He has a wife and two kids. They live in Frankfort, Kentucky, and they are happily living the American dream. John is in the shoe business, as his father and his grandfather were. Though John will never be a rich man, he takes pride in his humble shoe store. He is carrying out his family tradition. Plus, he loves the gratitude he feels by having the ability to supply all the people in his neighborhood with a quality product. His prices are fair. His shoes are the best quality. He knows his customers by name, face, and shoe size.

Though John has lost some business to the new mall that was recently built, his business is by no means at risk.  People go to John because he provides much more than just a pair of quality shoes. He provides a unique experience that the fancy mall could never offer.

Walmart opens up a few blocks away from his business. Now, John is starting to suffer. Some of those loyal customers who he could always count on to visit him once or twice a year now have the ability to buy the same pair of shoes that John carries for 20% less of the cost. Some remain loyal, but some do not. When push comes to shove, everyone has to save money.

John’s family begins to feel the effects of this changing world of commerce and how the average consumer prefers to shop.

John is an intelligent man. He sees what the future has in store for his shoe business. He begins to adopt new forms of marketing and other ways to sell his shoes. Though Walmart certainly poses a threat to John’s way of life, he is still capable of sustaining his business through his passion and persistence.

The late 1990’s arrive and eCommerce is booming. The same shoes that John has in his 60-year-old shoe shop are being sold at half the price. In addition to the reduced prices, Amazon is also carrying every type of shoe ever made – size, color, pattern, material, anything the customer wants.

The malls cut an arm off of John’s shoe store.

Walmart cut a leg off of John’s shoe store.

Amazon stuck a dagger in the heart of John’s shoe store.

Update: John has been forced to shut down his brick & mortar shoe store. He now sells his shoes on Amazon’s platform. He has never met a single one of his customers. He lives in fear, knowing that if Amazon removes his selling privileges, he will not be able to feed his family.

Has Amazon destroyed small businesses / small-town America? How can a small business owner ever possibly compete with a global eCommerce empire? I will leave that for you to decide…