When Amazon.com finds itself in litigation, sometimes they are not in suit with the original offender, but rather their insurance company. 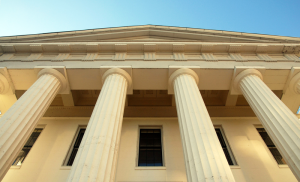 On appeal the court found that the factual allegations made by the plaintiff in the patent infringement litigation conceivably amounted to an advertising injury covered by the primary policy with Atlantic Mutual. Thus Atlantic Mutual had a duty to defend, and the court reversed the judgment and remanded the case for entry of a summary judgment in favor of Dynasty.