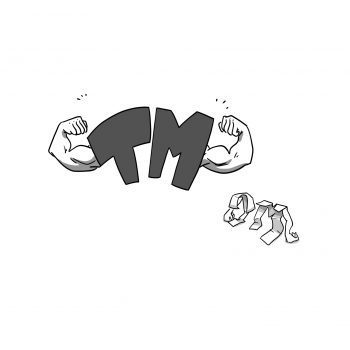 Under the Lanham Act, a trademark is defined as “any word, name, symbol, or device, or any combination thereof” which is used to indicate the origin or producer of specific goods.[1] Trademarks are not relegated to mere sight alone, however. Trademarks that are comprised of sounds (sound marks) are very common and have a history of garnering protection from both the courts and the USPTO through caselaw and registration.[2] Trademarks which rely on a specific color may, on some occasions, be held as valid as well, although with less uniformity or reliability.[3] Even scents have been considered a trademark, albeit in an even smaller number of circumstances and with even less uniformity in decisions.[4] In certain cases, the actual look, or “trade dress,” of the product itself may be considered a variant of a trademark. Trade Dress is discussed in chapter 4.

The accepted variations of distinctive marks are those which are suggestive, arbitrary, or fanciful.[6]

Opposite to distinctive trademarks are trademarks which describe the product itself, of which the two variations are descriptive and generic marks.[7]

There is no concrete rule to determine what marks are specifically generic or suggestive, simply because of the endless combinations of products and possible marks.[9]  Therefore, where a proposed trademark will fall on the spectrum, exactly, will depend primarily on the specific facts of each case.[10]

Fanciful marks are those which are specifically created for the purposes of source identification.  In other words, fanciful marks are those which are newly created by the Seller for the sole purpose of representing his or her brand.[11]  These marks have no actual meaning outside of their use as a mark.[12]  These invented words or terms have no logical relation to the product itself, and do not describe any aspect of the product.[13]  For example, “Häagen-Dazs,” the famous ice cream brand, was created entirely from scratch without any real basis in any language.[14]  Another example of a fanciful trademark is “Kodak”–it was created specifically to represent the Kodak camera brand.[15]

Arbitrary marks are similar to fanciful marks in a significant way: they do not relate to the product or describe any of its qualities.[16]  Where a fanciful word has no dictionary meaning, an arbitrary mark is a common word which is being utilized in an uncommon way.[17]  An example of an arbitrary mark is “Apple,” when used as branding for tablets, computers, and phones.  “Apple,” though the common name of a popular fruit, does nothing to describe any electronic product on its own.  Another example of an arbitrary mark is “Camel,” which, when compared to the cigarette brand it promotes, is completely unrelated to the products it usually finds itself labeling.

A suggestive mark relates to the goods it is applied to only when the consumer must use his or her imagination to make a connection between the mark and the goods.[18]  These marks do not openly describe or quantify certain characteristics of the goods, but instead only offer a point from which a consumer may relate the trademark to the goods with the “use [of] imagination or any type of multistage reasoning.”[19]  Examples of suggestive marks may include “Mountain Dew,” which could evince the idea of a refreshing liquid, and “Microsoft,” which could remind the consumer of either a microchip or software.

CJ’s Tip: Of all the classifications a trademark may fall under, suggestive marks are perhaps the best to focus on creating for any Seller wishing to create both a strong brand which can both stand up to contentions and challenges of validity and be remembered easily by and stick in the minds of consumers.  It is understandable and advisable that Sellers create a brand which is both inherently distinctive (more on that later) and allow the consumer to make a sensible connection between the trademark and the goods.  Suggestive marks fulfill both of these aims; they afford consumers a leg to stand on in relating the mark to the product while at the same time remaining inherently distinctive so that registration and possible lawsuits challenging the mark’s legitimacy do not offer much trouble.

Descriptive marks are those which “describe an ingredient, quality, characteristic, function, feature, purpose, or use of the specified goods.”[20]  In order to determine whether a mark is descriptive: does the mark signify or represent any quality or component of the subject goods.[21]  Since these marks relate to the product, they are the second least-protectible type of mark in the hierarchy of distinctiveness.  Examples of descriptive trademarks include “InkJoy,” when in reference to a line of ballpoint pens, and “Windows,” a computer operating system which features digital “windows” allowing users to view files and operate programs.[22]

Finally, at the bottom rung of the distinctiveness hierarchy are “generic marks.”  Generic marks include the word which the average consumer would recognize as the common name of the product itself. [23] Generic marks, because they are comprised of the actual word by which the product is known, can never be a trademark because they refer to the goods rather than the source. [24]  Terms which could be considered generic may include “Salt,” when affixed to packages filled with salt, or “Granite,” when applied to a company which is solely engaged in the production and shipment of granite.

Also important in the discussion of the spectrum of distinctiveness is the concept of “inherent distinctiveness.”  A mark is inherently distinctive if its “intrinsic nature serves to identify a particular source of a product.” [25]

To determine whether a mark is inherently distinctive, the mark will be examined along a series of factors called the Seabrook factors, which are:

(2)  unique or unusual in a particular field;

(4)   capable of creating a commercial impression distinct from the accompanying words. [26]

Where a mark resides on the spectrum of distinctiveness will determine how much protection it will be afforded as a trademark, or even if it can be considered a trademark. Where the mark falls will also determine whether it would likely be found to be inherently distinctive. 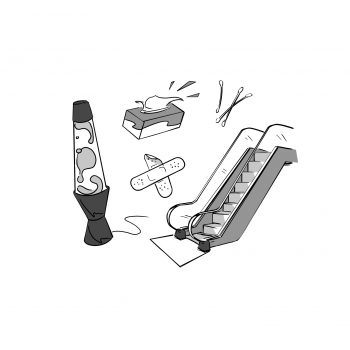 Under the Lanham Act, there are several types of evidence which may be accepted and reviewed to support the contention that the Seller’s mark has acquired a secondary meaning.[34]  This list of possible evidence includes: (1) the prior registration of the same or similar mark on the Principal Register; (2) the use of the mark in commerce for a period of at least five years; and (3) other evidence which would be appropriate and pertinent to finding a secondary meaning.  “Other evidence” includes the extent and success of advertisements using the mark, affidavits or declarations asserting that the mark is recognized as a source indicator, and surveys, market research, and consumer studies.[35]

The last concept to bear in mind when designing or choosing a trademark is the unfortunate occurrence of “genericide.”  Under the Lanham Act, “[a]t any time if the registered mark becomes the generic name for the goods” then the trademark may be challenged via a petition to cancel the mark.[41]  In other words, a trademark will lose its protection if it becomes the actual name of the product rather than a reference to the Seller in the eyes of the consuming public.[42]  Examples of trademarks which have been killed by genericide include such recognizable words as “yo-yo,” “escalator,” “aspirin,” and “thermos.”[43]  Other brands are right on the cusp of genericide and are fighting frantically to keep their trademarks, sometimes with mixed results.  For example, Velcro, the producer of a particular type of fasteners, has recently begun pleading to consumers not to use their “VELCRO” trademark as a noun, verb, or adjective to avoid their mark becoming generic. According to them, the correct name for their fasteners is not “velcro strips,” but instead “hook-and-loop fasteners.”[44]

There is no standard ordained by the Lanham Act to determine whether a trademark has been the victim of genericide.[45]  Instead, case law has established the precedent of the “public perception” test, which asks: “What do the buyers understand by the word for whose use the parties are contending?”[46]  This is, therefore, a situation a Seller needs to be wary of if their trademark has superseded the originally generic term in describing the product.  When this happens, the trademark describes the product, not the Seller.  This is especially bothersome for sellers who hold a patent in their product and are thus able to prevent the manufacture and sale of said products for a period of 20 years, during which time the consuming public may have come to associate the trademark with the product itself.[47]  Genericide can also be an unintended and unfortunate outcome of success.[48]  It is, essentially, an eventual penalty for successfully marketing and imprinting the Seller’s trademark into the minds of consumers.[49]

To avoid genericide, Sellers can employ a number of tactics to prevent their trademark from becoming the generic term for the product.  First, if the product is one the Seller has invented and patented, the Seller should also introduce a generic term for the product which differs from the trademark.[50]  Second, Sellers should never use their trademarks as nouns or verbs.[51]  Third, Sellers should remain vigilant and proactive in protecting their brands and policing their use as verbs and nouns by third parties.[52]  In short, if the Seller treats his or her trademark as a trademark designating the origin of the product and not the name or function of the product itself, Sellers can generally escape the specter of genericide. 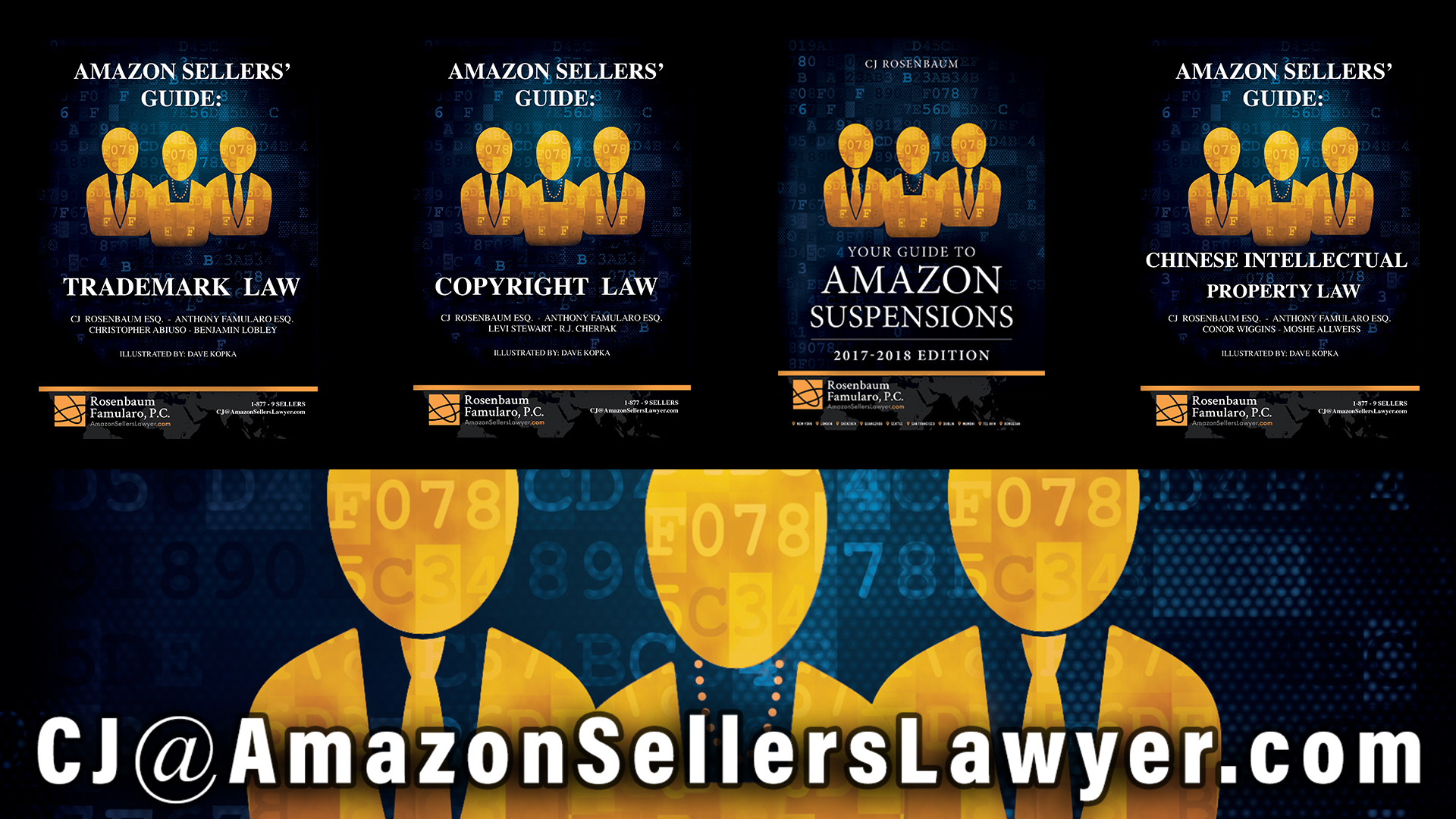 For a free copy of one of our books, email us today: CJ@AmazonSellersLawyer.com