We recently helped a seller get their account back after reaching out to us via our chat system. They were dealing with 2 issues: an inauthentic suspension and a used sold as new complaint, both of which we deal with on a regular basis.

He had reached out to Amazon twice to appeal the matter himself, and had not gotten a response.

The seller had invoices to show that his products were authentic. It was just one of those situations that we see many sellers dealing with – where there is no resolution. There was no fault necessarily on the seller; he had all his cards on the table, had everything he needed to have, and Amazon just was not responding.

After reviewing the previous Amazon appeals with the client, we informed him that we could help.

Beauty products are hard to sell. Such goods often expire, are fragile, and subject to FDA regulations. Sellers beware.

Due to the inauthentic complaints of a skin cream he had, our client’s ASIN listing was suspended while his account was still up and running. Unfortunately, before he had signed on with us, he had appealed on and off again with Amazon for 8 months. It was a really long process for him, but he tried his best to get his listing reinstated because he sold so many quantities of that product.

Amazon almost always communicates via canned responses. These mean that they are trying to work with you.

Amazon employees have a limited time to review appeals. Your POA should be a guide map to the evidence attached. 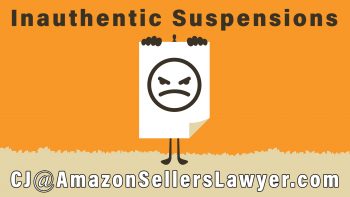 For a free consultation, or to speak to a member of our team, call or email us: 1-877-9-SELLER / CJ@AmazonSellersLawyer.com.